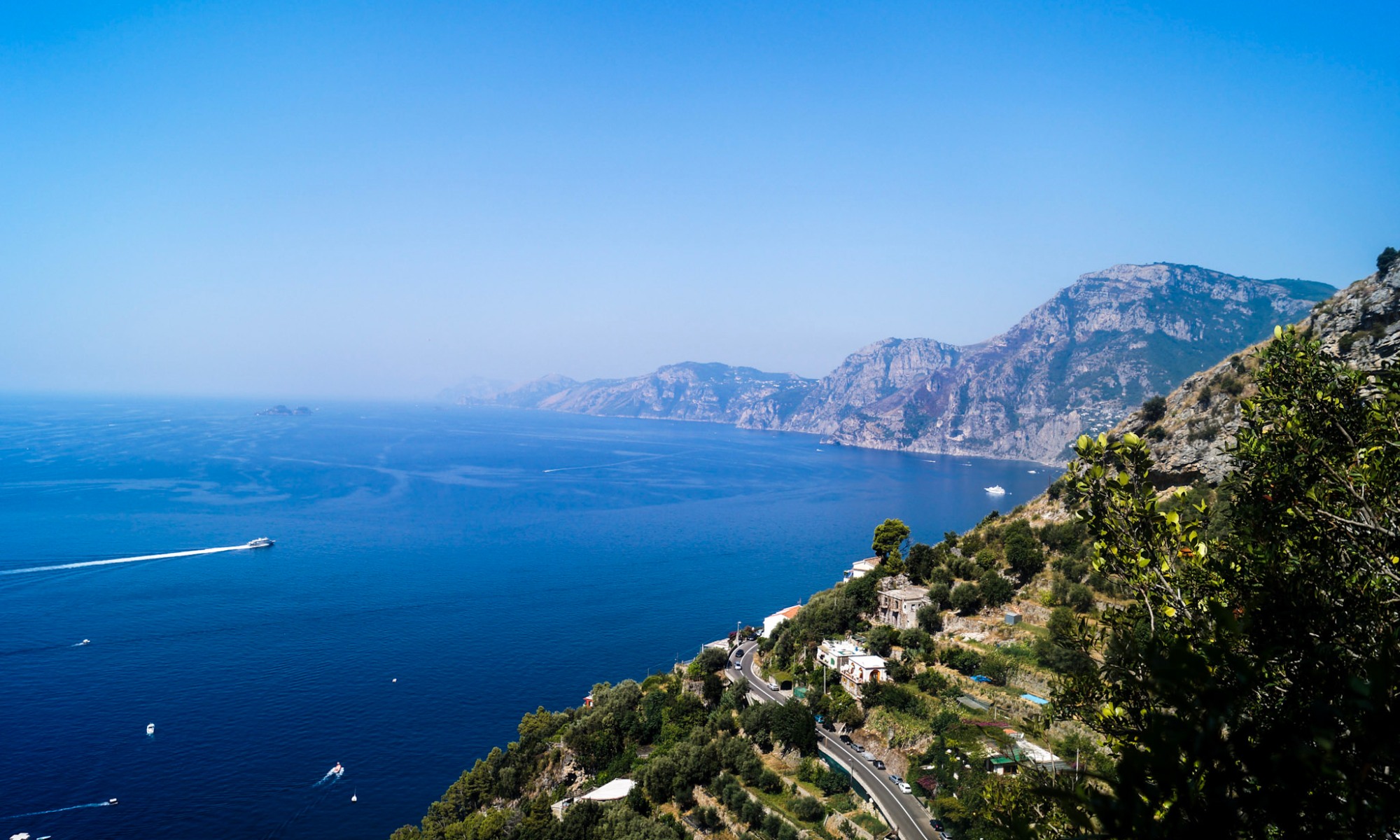 Today’s post is the last one in my Italy series. We are definitely ending the series on a great note since I’ll be talking about the Amalfi Coast.

The Amalfi Coast has been a dream of mine for years. Getting from Rome to Amalfi is pretty complicated but it’s totally worth the trip. I’ve always seen pictures of Positano and the little houses on the cliff with the beautiful view of the Mediterranean and wanted to see it in person. Most people do tend to go to Positano if they are going to the Amalfi Coast but we decided to check out Praiano. It is a smaller city but has just as beautiful of views and is a little quieter. We wanted to be in full relaxation mode by the time we got there so that made the decision pretty easy between Positano and Praiano.

We took the earliest train we could find from Rome to Naples and that was step 1 of the whole process. We were staying close to the train station in Rome so getting there was very easy for us. We got off the train in Naples and went to look for a bus that would take us to Amalfi which was definitely a mistake. The easier thing to do and what I would recommend doing instead would be to go to the “basement” or lower level of the train station and take the train from there to Sorrento. We walked around and wasted some time looking for the bus that we never found and ended up figuring out that we needed a train to Sorrento and finally found the entrance to a different train station that would take us there. Like I said, do not follow in our example and just go down to the lower level of the train station and take a train to Sorrento from there.

The train from Naples to Sorrento has 40 some stops so if you have a lot of stuff with you and don’t feel like standing up with all your luggage for over an hour, try your hardest to get a seat on the train. The first half of the ride the train is pretty empty but as you are getting closer to Sorrento, there is hardly room to stand. So prepare for this ahead of time.

After we got off the train from Sorrento, the bus station had a ticket office that sold tickets for buses that took you from Sorrento to Amalfi. We were going to be staying in Praiano, and pretty much all the buses there stop at Positano, Praiano and Amalfi. A very, VERY, important thing to note for people that get motion sickness – make sure you have some medicine whether it’s meclizine (Bonine, Dramamine, any of them), a scopolamine patch or a sea sickness band because that bus ride is going to be rough otherwise. I am someone that gets motion sickness pretty easily and I was absolutely miserable on that bus ride.  If I remember correctly, the direct quote from my fiance during that ride was “Yuliya, you are literally turning green”, so yeah, definitely be prepared. There are a lot of windy roads and the bus goes pretty fast. I really wish I wasn’t sick during that bus ride because I couldn’t even appreciate the breathtaking views that were happening outside my window during the ride. The ride itself is about 45 minutes long if you are staying in Praiano, a little bit less for Positano and a bit longer for Amalfi. 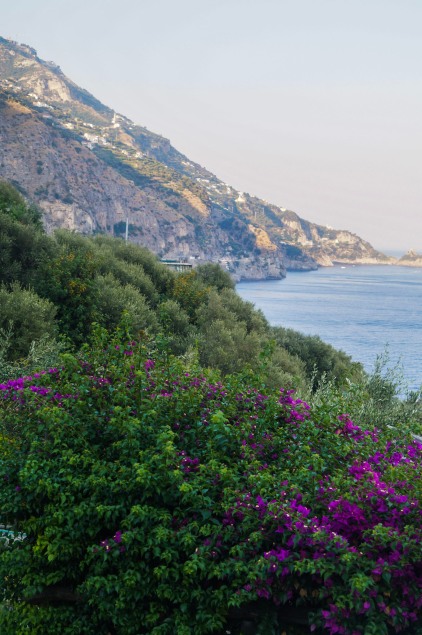 When we got off the bus, we started looking for our hotel which shouldn’t have been too difficult considering there is literally only one road that goes through the city yet we somehow were having a lot of difficulty finding the place. That could be because the numbers sporadically change which way they are going (one minute you’re counting up and the next you are counting down instead, pretty bizarre). Luckily, one of the locals came up to us who clearly could tell we were lost and pointed us in the right direction. He even had our hotel owner’s number in his phone and called him to tell him we were coming. The locals in Praiano were so friendly and I can’t say enough good things about them.

The hotel we stayed at was Maresca Hotel Praiano and was absolutely perfect. We had a beautiful view of the Mediterranean on the terrace where breakfast was served every morning and we were only about a 10 minute walk to the beach ( and majority of those 10 minutes are spent walking down the steps to get do the water). We changed into our swimsuits when we got checked in and headed down to the water. There are a few little restaurants around the beach so we had lunch first with a beautiful view and then went down to the water to finally get some beach time. I would definitely recommend having shoes to swim in for this beach. It is very rocky and can be very rough on your feet otherwise. I was not aware of that but I really wish I had shoes with me to wear to swim in (I know, not the most stylish looking accessory but hurting your feet on a trip where you need them as healthy as possible is not an option). The water is a beautiful color and there are boats everywhere along the coast which makes a very picturesque area. There were only a few chairs to sit on so I would recommend bringing something to sit on. 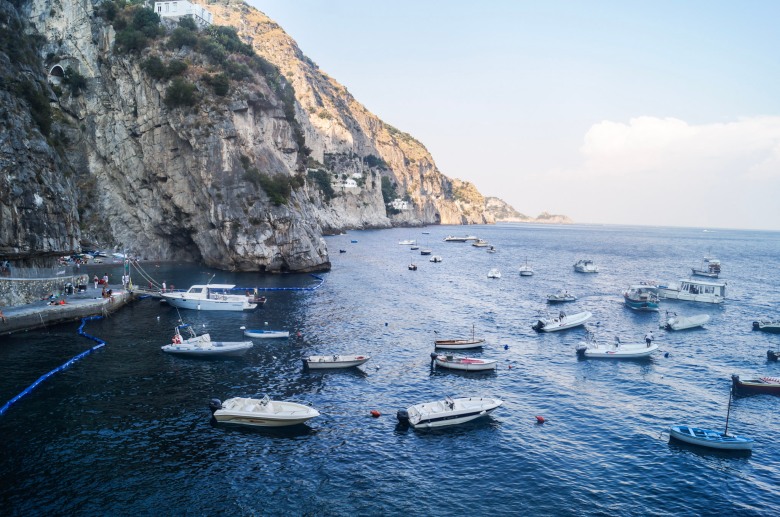 We hung out at the beach most of the day and then headed out to explore more of the city/ grab dinner in the evening. We found a cute little restaurant called Che Bonta that sits you along a staircase that had hands down the best calzone I’ve ever had in my entire life. The bread at this place was absolutely incredible and I definitely recommend stopping for a meal at this restaurant. We even grabbed lunch there on another day and we are usually not fans of going to the same place more than once when traveling.

On our second day there we spent majority of the day at the beach and just relaxing. It was just what we needed after 2 weeks of go-go-go and trying to see as much as possible. That night we made dinner reservations to a restaurant that was recommended to us by the owner of our hotel called Ristorante la Dolce Vista that had a breathtaking view of the sea and the cliffs right on the terrace. We were told to go right before sundown so that we could watch the sunset from there. It was one of the most beautiful views I’ve ever seen in my life and I really will never forget that night. To top off the beautiful view, the food was absolutely delicious and the service was amazing at this place. Even if you are staying in Positano or one of the other closer cities, I would recommend making the trip up to Praiano for this restaurant and get dinner here. You could see Positano from the restaurant and we watched the city light up while we were there. It was absolutely beautiful. If you are going with a spouse or significant other, this is a very romantic dinner and definitely something that you should do while you’re in Amalfi.

Our third day we decided to tackle the Path of Gods. For those that don’t know what it is – it is a hiking path that ends in an absolutely stunning view of Amalfi. The hike is 5 miles long and I would recommend bringing plenty of water with you if you decide to go on the hike. We did not even make it all the way to the top but halfway through the view is pretty incredible still. We finished off our trip with dinner at Costa Diva which is in the middle of a lemon grove. I wish we had dinner there during the day so we could see all of it lit up but it was pretty cute even at night. The food there was great as was the service. Overall, the service and people everywhere in Praiano were wonderful.

That wraps up the Italy series for me. If you have a chance, put Italy at the top of your list of places to see because it is a magical country. From the views, the food (the gelato!!), the atmosphere and the people – this place is absolutely magnificent and everyone should experience Italy at least once.

If you have any questions, don’t hesitate to comment below or contact me! As always, thank you for reading and I hope to have provided some travel inspiration.