Those who watch Kathleen Lights on YouTube are probably already familiar with KL Polish – the nail polish line that Kathleen launched in December. She has always been obsessed with nail polish so she decided to create her own cruelty free line of nail polish and came out with 6 different shades when the line launched. I am a big nail polish fan myself and as someone that repaints her nails every 3 – 4 days, I was excited to try her new line. I have tried a lot of different brands of nail polish just from the pure fact that I have several subscription boxes and they tend to send out brands that are different than the ones one may be used to seeing in stores such as Essie and OPI so I feel like I have a pretty good grasp on what is good nail polish and what is not. With all that in mind, I decided I should write a review on the KL Polish as I ordered 3 of the colors and have worn them enough times now to be truly able to judge how I feel about these polishes. Each nail polish is $8.50 a piece which is right between the price point between Essie and OPI nail polishes so I think the price is fair.

My overall thoughts: The nail polish itself is incredibly long wearing. I am definitely most impressed with how many days the nail polish lasts before it starts chipping so that is definitely my favorite thing about it. I am however, not a huge fan of the brush. It is pretty short and is a bit on the chubbier side and as someone that prefers longer and skinnier brushes like the ones on Essie nail polish, I would prefer something a little different. This is just my own personal preference though and I know a lot of people actually like the shorter brush. My biggest problem with the nail polish has actually already been addressed by Kathleen in one of her recent videos and that is the fact that the nail polish is pretty goopy (that is honestly the best way I can think of to describe it). You end up with almost too much on the nails at times and form a “bubble” that takes even longer to dry and does not look good at all, so you have to be really careful when you’re painting your nails with it. That all being said, this is a problem that is not consistent among all shades. When I go individually through the three colors I ordered, I’ll mention which ones I had the most problems with. Kathleen did say that the next line (her spring collection), the nail polish will be less viscous and this won’t be as much of a problem anymore.  Now let’s talk about the colors individually and show some swatches.

This one is my favorite color of the three but unfortunately it is currently out of stock on the website. This is a nice mauve shade that can be worn with almost anything. It acts as a neutral and would look great against any skin tone. This is by far the nail polish that lands me the most compliments and is definitely one I get asked about the most. 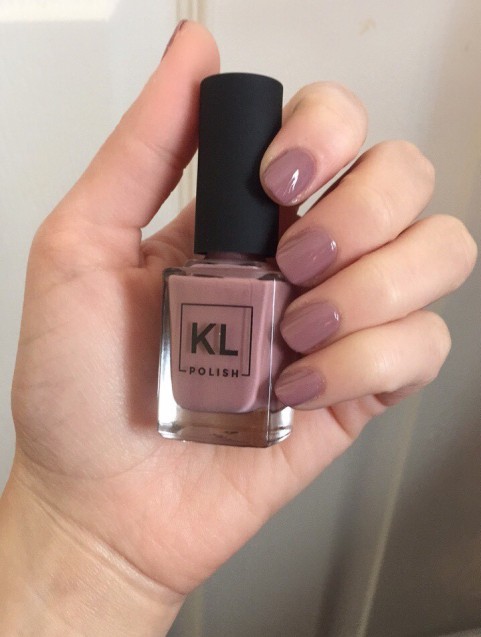 I would describe this as a brown with a red/orange undertone and for me, it was different than any other nail polish color I’ve ever owned. This is by far the nail polish that I had the most problems with as far as the goopiness/viscocity. I had trouble getting this one to look really smooth on the nails so I definitely hope this gets changed when the nail polishes get reformulated. 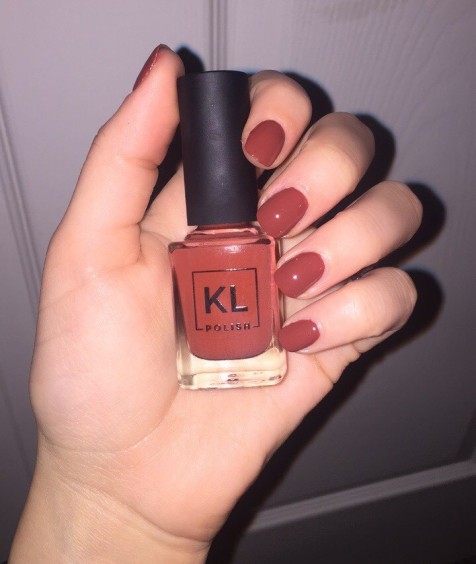 This is going to be my new go – to neutral/nude color. This one lasted the longest as far as chipping goes and applies the smoothest of the three that I tried. It is still available on the website and I would definitely snag it before it sells out. This elongates your hands and makes your nails look so nice and polished. I will definitely repurchase this one when I run out. 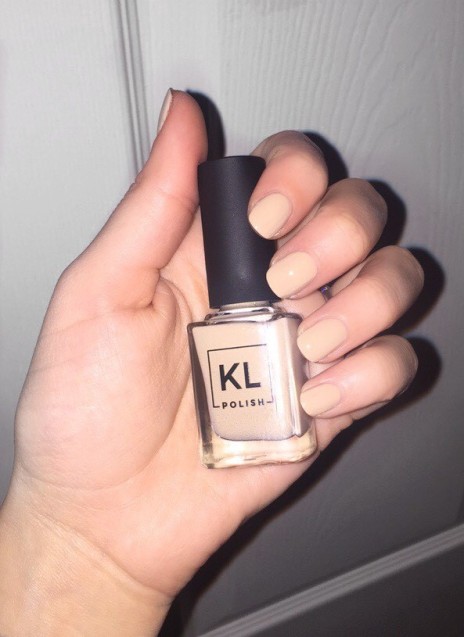 The names of the colors above are links to the KL Polish website for those particular colors.

Overall, I am pretty happy with the nail polishes and am looking forward to Kathleen’s spring collection. I am happy that she addressed the issue with the viscocity of the polish and that this will be addressed. There aren’t that many shades to choose from right now so if you’re looking to try this polish I would maybe wait till the spring so that there’s an extra collection available so you can snag more colors. I give this polish a B+ right now with definite potential after reformulation.