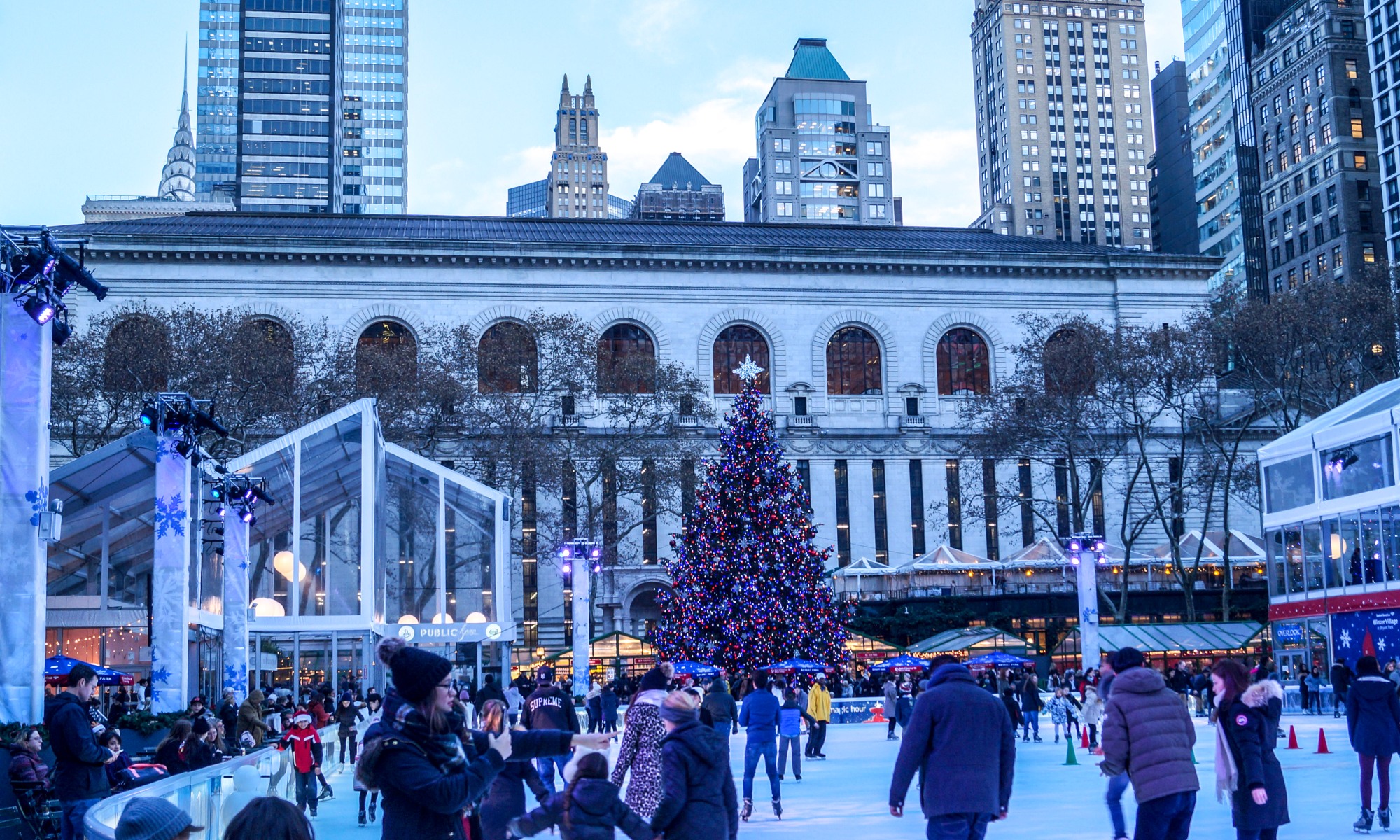 New York City is known for going all out during the holidays. It is the city that comes to mind first when thinking of holiday spirit. Some have the association due to Home Alone 2 (my generation, at least) and others have just seen images and videos of what the city turns into during this time of year. I got the pleasure of experiencing New York during Christmas time two years ago for the first time but my husband has never been and this was my chance to take him.

So today’s post will essentially be a detailed itinerary of what we did and what I recommend doing in the city during this time of year. If you’re interested in more information/suggestions on New York, also check out my weekend New York Guide from my bachelorette party weekend in May.

This was essentially our travel day so we knew we would only get a few hours in the city. Number one goal of Day 1 was to see the Rockefeller Tree and holiday displays. The goal was accomplished as we fought through the crowds to see the 75 foot decorated giant in all its glory. The tree truly is a sight and everything around it makes it just so much more special. There are other little Christmas trees all around that area by Rockefeller and from there you can see the amazing light show/display that is projected on top of Saks 5th Avenue as well. I recommend walking up to Saks to see the window displays as they’re always really cool with a theme (this year being Snow White-esque). We then ventured over to see the giant Christmas ornaments on 1251 6th Avenue (1 block away from Rockefeller). We also visited Bryant Park which I recommend doing as well to pick up a cup of hot chocolate and a delicious pastry and to either ice skate or just walk around (there are holiday shops set up everywhere).

This was going to be our busy day so we started bright and early at Central Park. After walking through, taking a few pictures and deciding not to ice skate (I was too cold and any activity that was going to make me colder did not seem appealing) we headed over to the Museum of Natural History. My husband wanted to see the Titanosaur so we spent quite a bit of time looking at that along with the other dinosaurs (if you’re bringing a male companion or someone that was into dinosaurs growing up, I recommend checking this out). Then we ventured over towards downtown to our favorite Mexican place in the city (can’t go wrong with Benny’s Burritos) and walked around Greenwich Village.

We headed towards the intersection of Grove and Bedford streets to see the “Friends” apartment and after grabbing a cup of coffee to warm ourselves up, headed towards Wall Street. The Christmas Tree on Wall Street is not much less impressive than the Rockefeller Tree. This one also has a Menorah in front of it for my fellow Jewish readers. We visited the 9/11 Memorial and walked around downtown some more and then took the train up to Union Square to meet up with our friends for some Italian Food and my favorite NYC activity – Comedy Cellar. For those who aren’t familiar with what the Comedy Cellar is, I wrote about it extensively in my May NYC post but I will happily talk about it again. Comedy Cellar is where a lot of the big names in comedy got their start – Chris Rock, John Stewart, Amy Schumer, to name a few. When you go, you don’t know who you will be seeing that night because a lot of the big names tend to pop in and do a set so one of the most fun parts about the experience is not knowing who you are going to see. We got lucky when we went because not only was every single one of the five comedians hilarious, one of those comedians happened to be Ray Romano which made the experience even more fun. So if you’re planning on going to NYC, a few weeks before you go, make a reservation for a Friday or Saturday night show at the Comedy Cellar. You won’t regret it.

Another activity we tried to do that night was go to Rolfs which is a restaurant decked out in holiday decorations. Seriously, Google it right now or look it up on Instagram. The place looks insane and we tried to go see it but they don’t take reservations and the line to get inside went on for what seemed like a mile so we ruled it as a “maybe some other time” thing but we did get to peek in and see how cool it looked inside the restaurant. I also definitely recommend swinging by Paddy Maguire’s Ale House which is literally a 2 minute walk away from Rolfs and getting a drink at the bar that has its entire ceiling covered in Christmas lights. Super cool experience and we got in with no line. Major bonus.

Let’s call this our Brooklyn Day. We started the day at Leo’s Bagels downtown (yes, technically not in Brooklyn yet) and then ventured over to the Brooklyn Bridge. This was the day that we got 5 inches of snow so the experience was very different from any other time I’ve been on the bridge as it was practically empty with heavy snow falling down the entire walk across. We walked over to Brooklyn and explored the picturesque Carol Garden’s and Williamsburg. Holiday Markets popped up along the way and we definitely took advantage. We went to Artists and Fleas before dinner where I snagged a rose gold evil eye necklace and some other things. This place is always around and has a ton of great jewelry options, glasses, clothing and other items that would make great gifts to bring back. We then headed off to a tapas place and tasting menu’ed it up for the rest of the night. Ten tapas and a few cocktails later, it was time to head back.

I would tell you guys about Day 4 but that was just a great day spent with our friends that live in New York consisting of soup dumplings and other foods, games and great conversation. The day was super laid back and was exactly what we needed. We had amazing hosts as usual in New York and the city welcomed us in the same wonderful way it always does. We will be back. 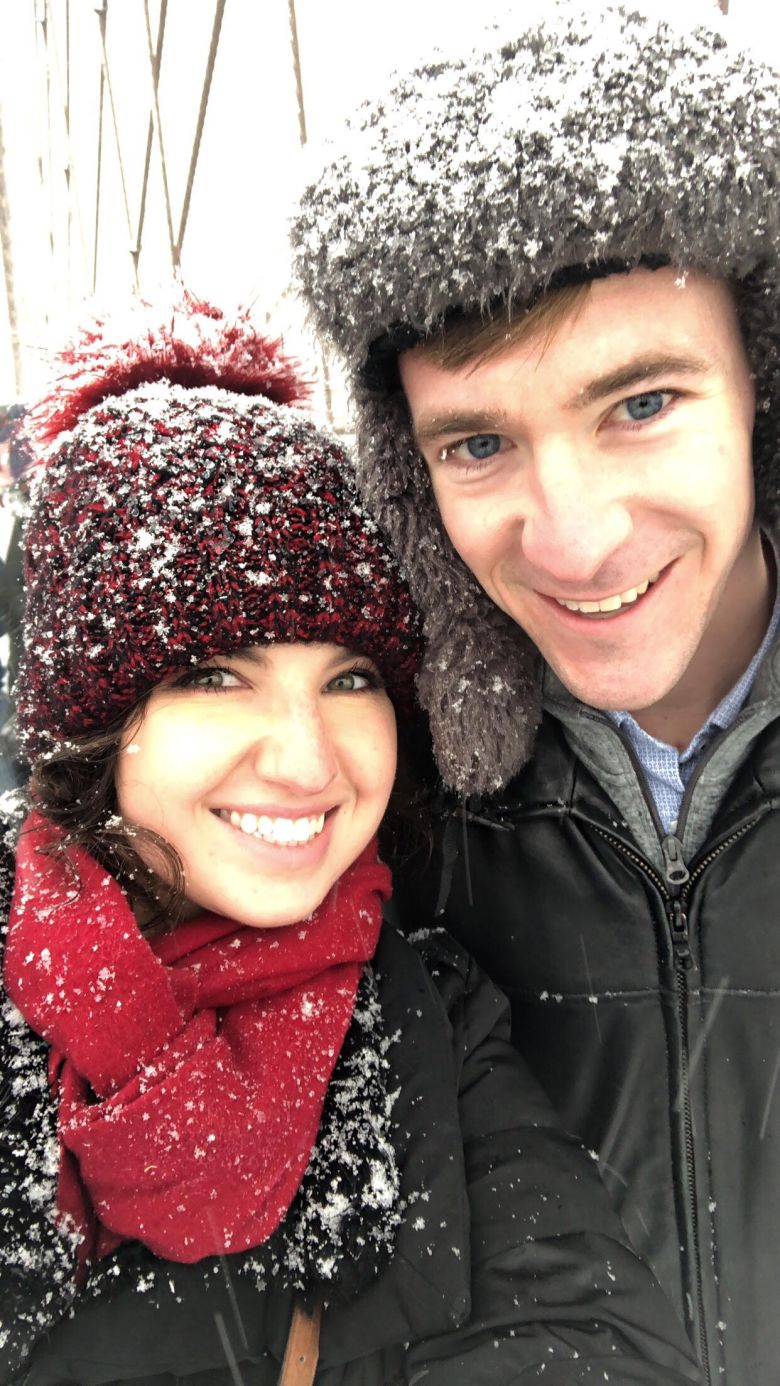